Not everything you lose is a loss

A home without a mother is just a house. Agree?

It was lily's first night without her mum. She tried hard to console herself, but the pain was endless. At some point when she could not bear the pain, she decided to go out for a walk. She wore her mother's beautiful red shawl, which was eventually her last article in the house. She tried to feel her mothers' essence through that shawl. She could feel her mother's fragrance from it. Tears kept on rolling down her cheeks. The pain of losing a mother is indeed a real thing.

Well, she wore her shawl and went out for a walk. She was continuously thinking of the moments they once enjoyed. The tears kept on rolling and the heart continued to mourn.
At the midnight in the winter season, she was so depressed that she could not even realize what was she doing, what was the weather, and what was the time. She could not realize when did she came this far, it was more than 10km from her house.

Soon she decided to return home. While returning, she saw an old lady sitting beneath the tree. She barely had any cloth on her. Her lips were dried. The restless, tired, skinny body depicting as if she did not eat properly for long. Her jumbled grey hairs, bent body were saying she had no one to look after. She kept on staring lily with the hope of living some more days. Her teary eyes, shivering body were almost giving up to the cold. She didn't say by words by her eyes had a hope!

Once lily moved ahead, which was very obvious. How could she give her the shawl which was her mum's last article? But then she recalled her mum's words "those who live for themself live for years, but those who live for others, live forever". She held the shawl tighter, felt the fragrance one last time, cried harder, and then gave it to that old lady.
She could clearly see her shivering lips, and teary eyes which were trying to say, live long my child, but could no say it louder!
Well, she set her hairs, told her to take care, and decided to return.
Inside she knew that she lost her mum again, and this time forever. 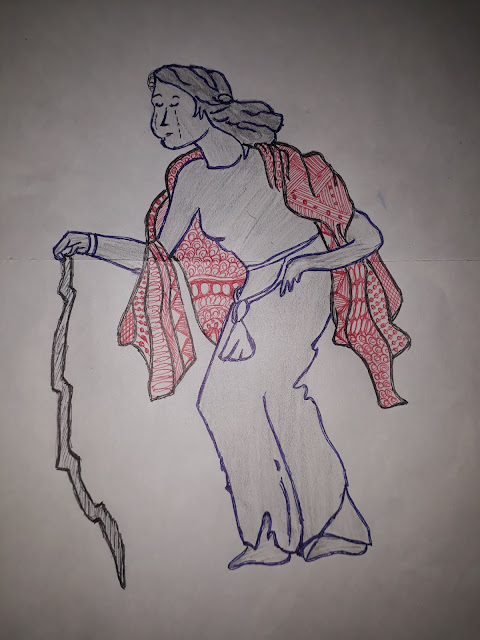 Just after some steps, she felt someone held her from the backside, she got scared. She was just about to kick when she felt the tears that were wetting her shirt. She looked back, it was the same old lady!
She asked her if she wanted anything else, but could not get the answer but the tears kept on wetting her shirt. She hugged her tight and thanked her many times. Lily held her, wiped her tears, and asked what happened. The old lady told her that her children took away the only house she had, and left her under this tree to die. She was too old, too weak to work, hence she was forced to beg. She thought she would die this winter as she didn't have any warm cloth. But then lily appeared as an angel and saved her life.
Lily could not utter a single word. She was just staring and listening to her. With the fact that she lost her mother twice in just 2 days, she realized she got blessed with a grandmom. With tears in her eyes, smiled again and hugged her back.

Moral- Not everything you lose is a loss.

Reach me this way.