When was the first time you heard about Mathura? It was probably in your childhood when you were reading one of those iconic Amar Chitra Katha books, depicting the stories of Lord Krishna. Or it was your grandmother, who told you bedtime stories about little Krishna and his endearing pranks? In all those stories, a name kept coming up – Mathura, his birthplace. Back then, Mathura never felt like a place to you; it, on the other hand, felt like a character, living and breathing and full of life.

Mathura boasts a rich cultural heritage that is weaved through hundreds and thousands of legends and myths. No wonder, it is regarded as one of the seven holy cities by Hindus all over India. Even in this modern age, the charm of Mathura continues to lure visitors from all parts of the country and beyond. And what makes this sacred city a hot favorite among tourists? The answer is pretty simple – the enticing milieu of sacred temples, religious structures, landmark monuments, and serene ghats lend Mathura a surreal beauty that is hard to find in your regular tourist destinations.

One such beautiful place is Kusum Sarovar.

Kusum Sarovar is a sacred water reservoir surrounded by a medieval sand monument.

It is located between the Manasi Ganga and Radha Kund on the famous Govardhan Hill in the Mathura district of Uttar Pradesh, India.

Kusum Sarovar is acknowledged as one of the holy sites where Hindu deities Radha and Krishna performed their rituals. Kusum Sarovar has Narada Kund, where Bhakti Sutra verses were written by Narada and the Shri Radha Vana Bihari Temple in the vicinity.

Kusum Sarovar was a natural pond until 1675 when it was professionally built by Orchha's monarch, Veer Singh Deo.  In 1735, King Veer Singh of Bundelkhand, Madhya Pradesh, ordered the restoration of this place. The area around this place was rebuilt by King Suraj Mal.  In commemoration of his father Raja Suraj Mal, King Jawahar Singh of Bharatpur erected a sandstone monument in the backdrop of Kusum Sarovar in the mid-eighteenth century.

"A Handbook for Visitors to Agra and Its Neighbourhood," by Henry George Keene, published in 1878, describes Kusum Sarovar.

"On every side of the reservoir that fronts it, handsome landing-places run out into the still water with deep and wide staircases between; a venerable banyan tree shades the south side, and sends it pendant shoots towards the water… The spot is singular in its repose, its silence, and its irregular charms." 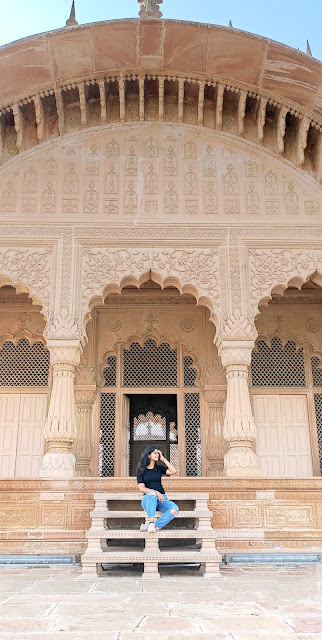 Kusum Sarovar dates back to the era of Radha Krishna.  It is a site surrounded by flowers and Kadamb trees, as the name says. Radha is supposed to have come here under the guise of picking flowers for her companions, but instead met Krishna and had lively chats with him.   According to mythology, Radha's dress became trapped in thorns while collecting flowers, and Krishna, dressed as a gardener, came to Radharani's rescue and freed her dress from the thorns. On this historic spot, Krishna is reportedly said to have played hide-and-seek with his companions and collected flowers for Radha's garlands. 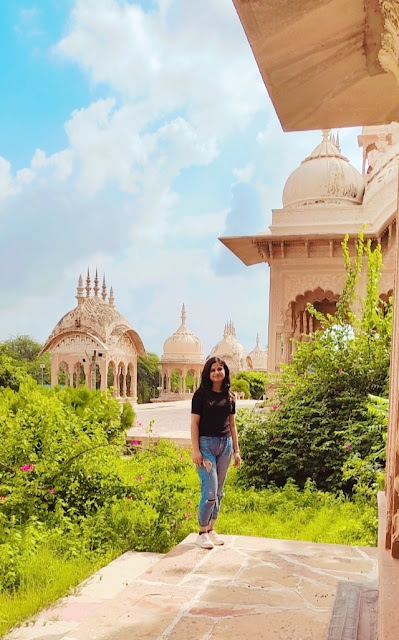 Kusum Sarovar Ghat is a 450- foot- long, 60- foot- deep tank in Kusum Sarovar. The pond’s ghats (banks) have a Rajasthani design. A series of steps climb upward from all four corners of the Kusum Sarovar to the historical edifice built by King Jawahar Singh. Around 60 meters deep are the arcade walls that surround the pond. The pond, which is filled with emerald green water, is surrounded on all sides by a forest that offers a multitude of flowers.

The historical monument was built in commemoration of King Jawahar Singh's parents. The main tomb, dedicated to King Suraj Mal, is positioned in the center of the colossal edifice and covers an area of 57 square feet. There are two other historical constructions on both sides of this tomb that are considerably lesser in size. These tombs were built in honor of King Suraj Mall's two queens, Kishori and Hansiya. 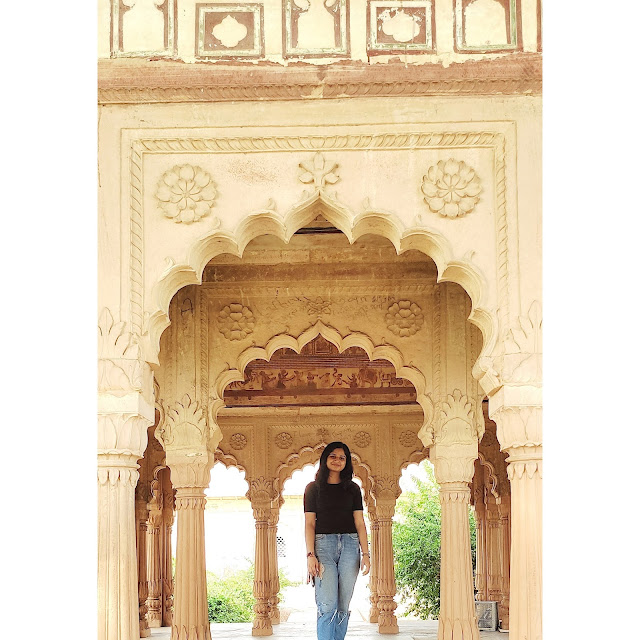 The whole structure is supported by a 460-foot-long terrace and a pavilion that serves as a protective cover for both corners of the structure.  Inside the tomb, the architecture and sculpture are in the perforated stone style, and the cenotaphs' ceilings are embellished with magnificent murals depicting Radha Krishna's divine pastimes and happenings at Maharajas Suraj Mal's court. The edifice also includes a copy of Lord Krishna and Radha's lotus feet.

Why should you visit Kusum Sarovar?

Kusum Sarovar is a popular tourist destination in the Braj region. Visitors travel across the state to see the majestic structures that enclose the Sarovar (pond), as well as the exquisite murals representing Krishna's life and his adventures with Radha. Radha Krishna is said to have performed numerous pastimes here. During his time in Vrindavan, Chaitanya Mahaprabhu, a Vaishnava saint and a renowned devotee of Krishna liked to visit this pond. Kusum Sarovar was also known as Suman Sarovar during the reign of Chaitanya Mahaprabhu. It is stated that anyone who bathes in the Kusuma Sarovara pond will gain pure Krishna's love.

Reach me this way.